What is complexity leadership?

Complexity leadership theory (CLT) focuses on emergent processes within complex systems and suggests that leadership needs to operate at all levels in a process-oriented, contextual, and interactive fashion (Marion & Uhl-Bien, 2001). The model emphasizes the importance of social interactions within organizations yet also illustrates the key role of the leader in enabling change. 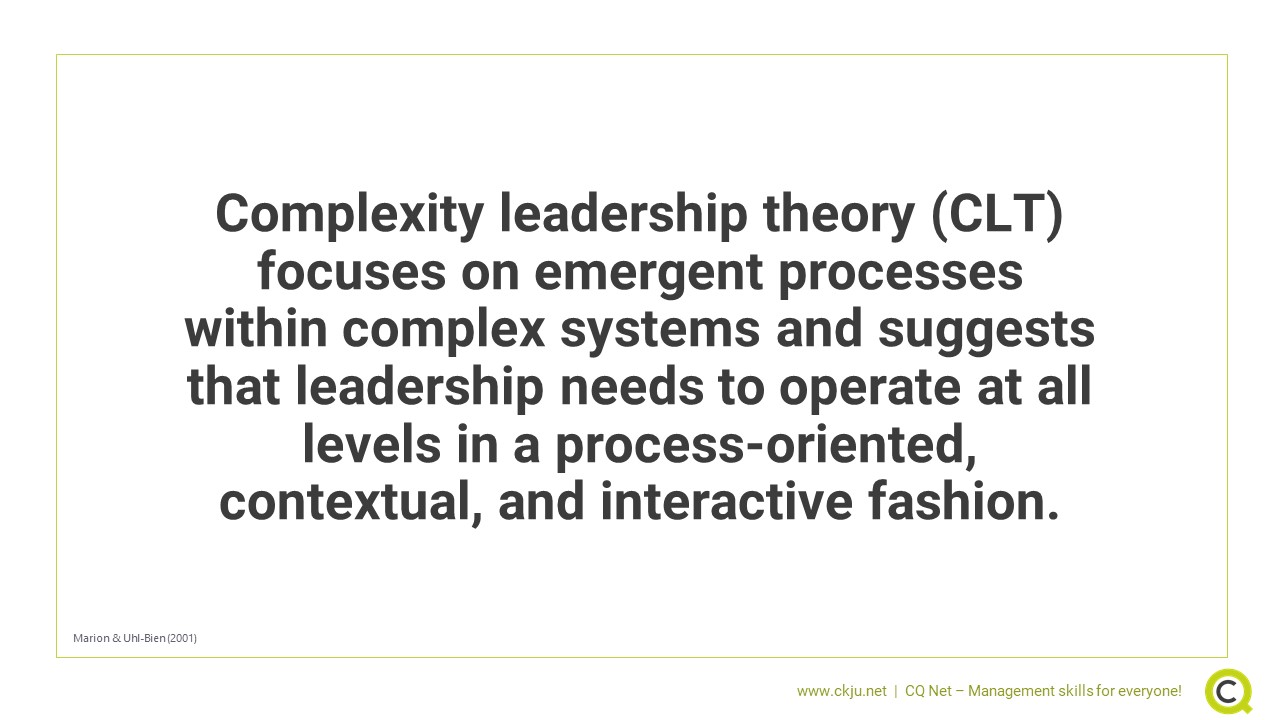 Complexity theory rejects linear causality and takes under consideration the whole system instead of just a part of it (Davis & Sumara, 2014). It has been applied in organizational settings to comprehend how effective organizations can gain a competitive advantage through leadership strategy and direction (Marion & Uhl-Bien, 2001).

How does complexity leadership work?

Complexity leadership theory recognizes the dynamic interactions that take place within organizations as they change, create innovation, and evolve with a focus on complex relationships and network interaction rather than controlling, standardizing, and autocracy (Uhl-Bien & Marion, 2009).

The interactions within a complex environment that is undergoing organizational change can be tense because individuals respond to both external and internal pressures as they struggle with interdependency and conflicting restraints (Lichenstein et al., 2006).

Complexity leadership model is a form of shared leadership

Several scholars agree that complexity leadership theory is a form of shared leadership in which the leadership position is not concentrated in one person, but shared among many (Carson, Tesluk, & Marrone, 2007; Ensley, Hmieleski, & Pearce, 2006).

In classical leadership theory, most of the discussion arises on the relationship between the leader and the follower. However, complexity leadership illustrates that the focus is on the many and constantly recurring social interactions within a network. Therefore, anyone within the workplace can become a leader through their social capital.

For example, a study by Hanson and Ford (2010) found that the core leaders in a hospital laboratory setting in were not the formal director or administrators, but rather the workers on the front line – the customer service representatives. The study showed that the customer service core played an important role in conducting information flow to all others in the lab and had heavy influence among other lab sections.

In complexity leadership any agent involved influences the dynamics

Moreover, in complexity leadership, any agent involved in collective action can manifest and influence those dynamics which enable innovation. These dynamics are orchestrations of interaction, interdependence, tension and resonance among heterogeneous agents (Lichtenstein et al., 2006).

Lichenstein and Plowman (2009) provide other examples of complexity leadership theory as a model of practice. Here are two examples:

These examples demonstrate how complexity leadership behaviors can result in outcomes from a synergy of social interactions within a complex environment.

What are the benefits of using complexity leadership?

Particularly in an economic era not rooted in industry but rather in knowledge and fast-paced change (VUCA), the ability to acknowledge complexity and to derive the best results from it is vital for long-term success and growth (see Uhl-Bien, Marion & McKelvey, 2007).

Complexity leadership is beneficial to organizational change and innovation

A series of research studies conducted from 2007 to 2015 across 30 complex organizations found evidence that these pressures within a system create innovation and adaptation, which are important when organizations are going through change (Arena & Uhl-Bien, 2016).

How to implement complexity leadership in an organization?

Using complexity leadership means giving room to change and innovation, and harnessing the results of the natural interactions that take place in organizations.

Although complexity leadership theory is a systems theory, the leadership component itself still plays an important role: whenever an event takes place and people react and adapt to it, innovation and creativity can take place. In order for this to be facilitated, leaders must nonetheless enable this environment within a complex system and a formal structure.

Most organizations work hard to decrease complexity. As a systems theory, complexity leadership theory takes another stance towards complexity. It asks you to increase organized complexity to improve competitiveness in a VUCA environment. This process is called system differentiation and points towards the following three action areas (Luhmann 2013):

Enable rather than dictate organizational change

Although leadership effects can never be certain because they are always affected by changes and constraints in the social environment (Uhl-Bien & Marion, 2009), it is important that professional enable rather than dictate the processes that enable organizational change.

Overall and as a holistic theory, complexity leadership theory provides a useful framework and model in understanding how successful organizations manage change within a turbulent environment.

One of the major strengths of complexity leadership is that it helps enable an understanding of how organizations respond to organizational change. It is also a holistic and broader theory in that it focuses on the entire system rather than focusing on separate parts of the organization.

There is little empirical evidence for the success of complexity leadership

The main weakness in complexity leadership theory is the paucity of empirical research on the dimensions underlying the model. Most of the evidence for the effectiveness of the model is illustrated in computation modelling and case studies. More rigorous methodological approaches are needed to determine the full effectiveness of complexity leadership theory.

The theoretical framework is useful for organizations operating in a turbulent environment and so far the research has supported the central tenets of the model. However, the lower rating for this construct is due to the reliance on computational modelling and case studies to support the theory. More empirical quantitative research is needed to support the validity of CLT.